My previous work situation (aka ‘job’) obliged me – for the first time in my life – to drive a considerable distance several times a week.  The subsequent enforced intimacy with the A1(M) entailed by this necessity was made far less tedious by the repeated playing of a double cd of narrative verse, featuring, among others, Goblin Market, The Wreck of the Hesperus and The Pied Piper of Hamelin.  Nestled alongside the tremendous pleasure these poems gave me, (powerful enough to counteract the malign influence of The Black Cat Roundabout) was a sense of embarrassment over how little I knew some of these literary landmarks, my ignorance including being unaware of the origin of the phrase, taken by H.E. Bates as the title for a Larkin novel, ‘Fair stood the wind for France’ in the poem Agincourt by Michael Drayton (1563–1631).

One of the selected poems with which I at least used to be reasonably familiar was The Eve of St Agnes, and I began to pay particular attention - as Peterborough alternately reeled me in and flung me back home – to the themes of music and sound in this stunning work.  I offer below a few observations (which I certainly would not dignify by presenting as anything like cogent analysis) that may stimulate you to re-read the poem, and responses to which I’d be delighted to see. 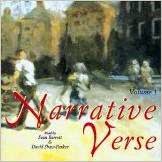 Let’s start with the owl who (to purloin and entirely misuse a Keatsian phrase) practices a little negative capability, in that it is described at the poem’s opening as being ‘a-cold’ despite ‘all his feathers’.  As literature in general and poetry in particular usually dwell upon the sound rather than appearance of owls, Keats’ unusual perspective emphases the eerie silence of his scene, which is also expressed in the mute sheep which next take the stage: ‘And silent was the flock in woolly fold’.

A little later, when the wretched Beadsman, having already demonstrated his chronically inflated sense of empathy by imagining how cold ‘the sculptur’d dead’ must be feeling, is ‘Flatter'd to tears’ by the sound of music, an invitation to gaiety which he must ignore, in order to pursue his literally mortifying ascetic vocation.  ‘Music’s golden tongue’ is therefore an at least equivocal phrase here, and the negative connotations of music and sound are reinforced by Keats observing of the poor deranged chap that: ‘already had his deathbell rung; The joys of all his life were said and sung.’

The ‘golden tongue’ is nicely echoed in what I think is one of Keats’ most powerful and successful lines. ‘The silver, snarling trumpets 'gan to chide’ is extraordinary. The precision of ‘snarling’, to both evoke the timbre of the trumpets and enhance the ominous quality of the setting, is hugely pleasing.  If medieval trumpets were not literally silver, the line also contains an excellent piece of synaesthesia. If they were, I apologise. A subsequent simile that never fails to send voluptuous chills through my soul occurs as Keats describes how Madeline does not hear ‘The music, yearning like a God in pain’, another matchless evocation of how music (and all art) is most powerful when expressing suffering.

On a somewhat lighter note (ahem), Keats drops in a cosy piece of self-reference when he describes the song that Madeline’s suitor plays to the former while she sleeps as: ‘an ancient ditty, long since mute, In Provence call'd, "La belle dame sans mercy”’. But even this has a mournful undertone, with the assertion that the weight of time and history have buried the song.

There is, I am sure, a lot more to observe, and better joined-up-thinking to be done. I’m sure there are racks-full of brilliant theses on the use of music in this poem and Keats’ poetry as a whole, but the joys of this little contribution are said and sung.
Posted by davidreadersite at 15:00