The feline creature who previously graced this blog has left us mourning her passing, having attained the upper limits of cat longevity and brought us untold pleasure and invaluable companionship in doing so.  Following but by no means replacing Sally have come two new household deities. Splodge, 10 years old, is a handsome but frankly curmudgeonly rescue cat who is (literally) a poster boy for the Cat Protection League and who can turn (because, we fondly believe, of a challenging life including a period as a stray, not to mention arthritis in both forelegs, but, our more cynical selves suspect, possibly due to innate orneriness) from affectionate to violent behaviour in an instant.  Bramble, who is nearly new, is a kind of furry junior whirlwind, whose speed, excitability and curiosity send her ricocheting around the house in a bewildering blur of calico fur.  She has also recently and precociously taken to charades, as illustrated here. 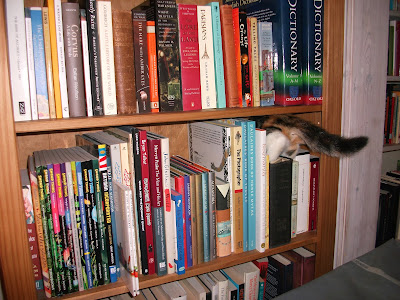 This was a particularly cunning selection on her part, because she obviously knew I would immediately plump for back cat-alogue and then Grimm's Furry Tails, whereas she had in mind the much more ingenious Our Mutual Fur-End.  You should see her do films.
Posted by davidreadersite at 16:56

Email ThisBlogThis!Share to TwitterShare to FacebookShare to Pinterest
Labels: cats